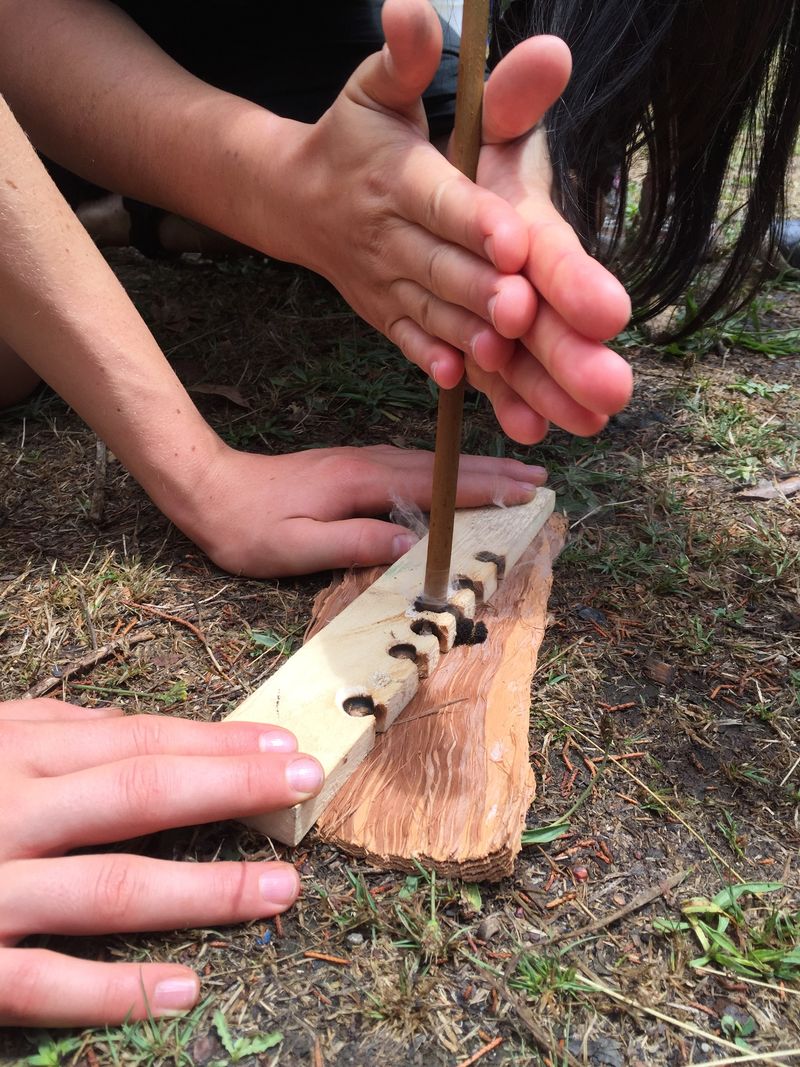 When I was a teenager I went camping for the first time with a good friend and her family on their bush property in the New South Wales countryside.  I spent hours around the campfire, staring at the flames and poking the fire with a stick.  I was fascinated by the beauty and the power of the flames flickering and dancing along the logs.  Eyes squinting against the smoke I would mutter under my breath "White rabbits, white rabbits" until the smoke stopped blowing my way.  As the fire died down I would stare entranced, at the glowing embers.

Fire is primitive.  It's terrifying and fascinating.  It keeps us warm and cooks our food.  And yet for most of us it's something we take for granted, packaged in a box of matches or tamed in a lighter.  Last year I was really excited to meet Speedy at The Village Continuum festival and learn how to use a flint and steel.  He had a tinderbox filled with homemade pre-charcoaled cotton, ready to use as fire starters.  He told me that 150 years ago everyone carried around a tinderbox with flint, steel and tinder so they could light a fire whenever they needed.  It was the modern precursor to the box of matches.

In making the things I need and the life I want to live I like to get back to first principles and learn the traditional, original techniques for doing things.  For me there is a real satisfaction in working with my hands.  I prefer to sand by hand rather than using an electronic sander.  I like the physical effort - the feeling of my muscles and my body working, breaking a sweat as I work hard.  Afterwards I feel satisfied.  Whenever I can, I like to do things by hand with the obvious exception of blogging.  I haven't quite perfected my homemade, pedal powered internet device.  Let me know if you do!

But back to fire!  Last weekend I met the resourceful Claire Dunn, the author of My Year Without Matches.  Claire showed me how to use a fire stick and a piece of wood to make fire.  Like all experts, she made it look easy.  However, when it came to my turn I found it was actually much, much harder than it looked!

To make fire I rubbed the fire stick between my hands, at the same time pressing it down into the notch in the bottom piece of wood.  My palms were hurting and my hands were strained with the pressure of trying to hold the fire stick in place.  When your hands reach the bottom of the stick you have to keep the downwards pressure while moving your hands back to the top of the stick and then start all over again.  I kept going and going.  I think that at one point I even managed to get a wisp of smoke from the wood (but I'm not sure, it could have been my hopeful imagination!).  Claire told me that it took her hours of practice to make it look so easy.  I'm always telling my kids - it's just practice.  Looks like I was right!

Even though I didn't actually make a fire, I felt like I achieved something.   I like knowing that I can make a fire even if I don't have matches or a lighter.  That I can be self-reliant when it comes to this most basic of human needs.  As well as learning something new, I connected with a raw and primitive power on it's own terms.  It's a power to be respected and feared.  One to be used wisely and well.

Thanks to Claire, I know the basic technique for using a fire stick.  Now I want to make my own fire stick and find a place out in the bush where I can practice making fires.  Although I suspect that in reality I will be practicing on the balcony of my flat!  Nothing like making do with what you've got :o)