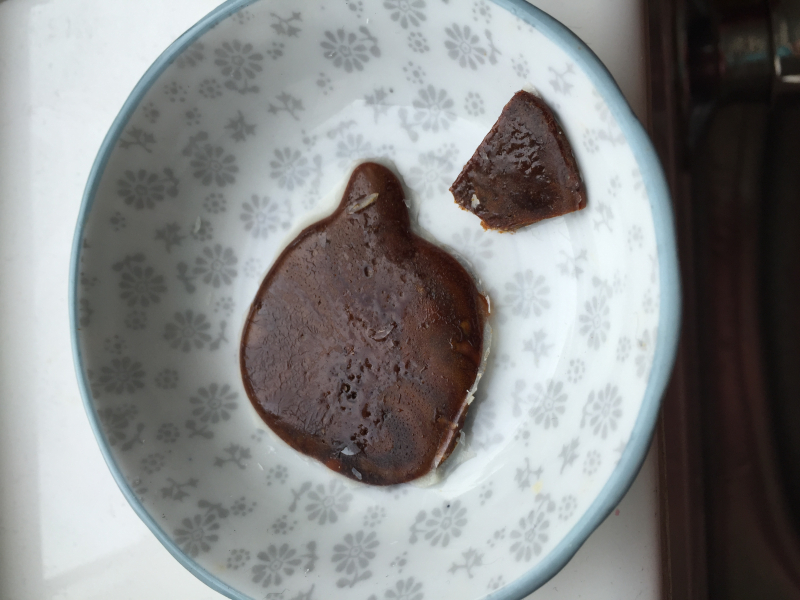 I was trying to make chocolate crackles and I made toffee instead.  Chocolate crackles are a staple at kid's birthday parties here in Australia but I have never made them.  I don't think I've eaten them since I was a kid but I got this sudden craving.  You know what it's like.  And no, I'm not pregnant!

The chocolate crackle recipe called for icing sugar and lots of it.  I'm more of a raw sugar kinda gal.  So I substituted rapadura sugar for the icing sugar.  But I was a bit worried about it being all grainy so I thought that I would melt it in a saucepan along with the coconut oil I was using.

I often wonder how things get invented.  Like, who on earth came up with custard?  Tasty yes, but how did they figure out how to make it?  Now I know.  They made a mistake and discovered something new.  Just like me adding sugar to coconut oil and heating it.  As I stirred the coconut oil over a low heat, the sugar started to coalesce.  It got all smooth and shiny.  What it didn't do was melt.  As I stirred, I thought, "Hang on a second!  That looks like toffee just like Mother makes in the Milly-Molly-Mandy books by Joyce Lankester Brisley."

At that stage it was perfect.  But in my excitement I turned up the heat and kept on stirring.  The sugar starred to go brown and lumpy.  I panicked and madly started spooning it out onto a tray lined with baking paper.  It was a little burnt but still yummy.

So, no chocolate crackles this time - slightly burnt toffee instead.

When I get the chocolate crackle recipe right, I'll share it with you here!