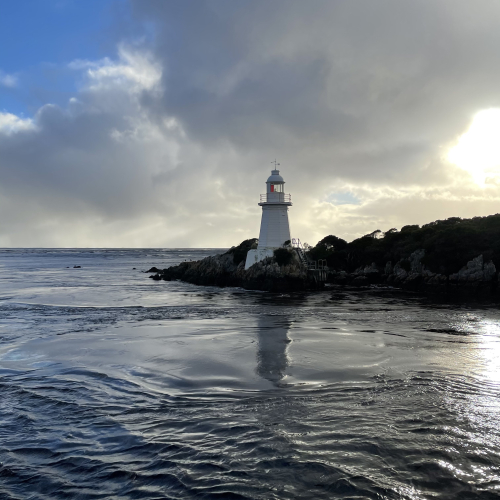 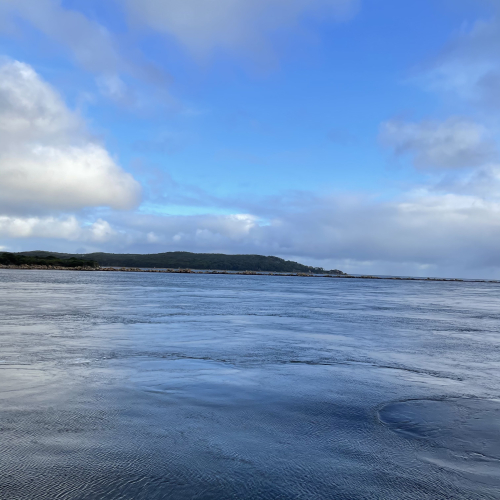 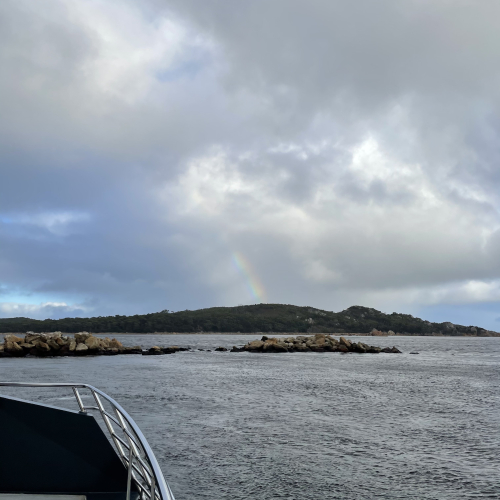 After spending yesterday chilling out, we were ready to get super early this morning to catch our boat from the wharf in Strahan for our cruise on board the Spirit of the Wild up the Gordon river with the Gordon River Cruises. Our captain was Doug who sung us sea shanties last night when went to see the play, The Ship That Never Was. It's still early days in our trip but I think it's the highlight so far. Along with the drive through the Tarkine to get to the ferry at Corinna.

We had a whole section of the boat to ourselves at the back of the lower deck. And thanks to my new sea sickness bands, I didn't feel seasick once! Our fellow travellers were a friendly bunch and the guides on board the board were helpful and enthusiastic. We had a commentary about things we passed as well as footage of actors playing the parts of key European historical figures such as Captain James Kelly and Lady Jane Franklin. As well as a First Nations person talking about the area.

Our first 'stop' was to travel from Strahan out through the infamous gates of hell into the Great Southern Ocean where the roaring 40s prevail. We stood at the prow of the ship, holding on to the rails as we rode up and down the waves. It was like being on a rollercoaster - heaps of fun! Not so much fun for the sailors or convicts in the 1800s when it was called the gates of hell. So named because the channel entrance to Macquarie Harbour is incredibly narrow and shallow. Boats had to hug the shore to make it in and out. Or crashed on the rocks.

In the late 1800s, William Damper came up with the idea to build a wall to dredge the sand in the harbour and make the channel deeper. He built a working model of the harbour before work began. It took convict labour three years and tonnes of stone to build the wall. As we sailed along the coast we could see the stops of the rock wall which extends from well inside the harbour, out past the heads. Cormorants were using the top of the wall outside the heads as perch when we went through.

From Entrance Island at the heads, we travelled the 35km length of Macquarie harbour to the mouth of the Gordon river. Macquarie Harbour is Australia's second largest harbour, the largest being Port Phillip Bay in Victoria. We went past the fish farms in the middle of the harbour where we learnt that salmon are farmed in nets that are 20-30 metres deep and house some 40,000 fish. Apparently the ratio of 12 kilos of fish to a cubic metre is some of the best in the world. The salmon are brought here on fish transporters when they are 150-300g in size, then vacuumed up and transported away for processing once fully grown. They are fed pellets that contain number 27 to make their flesh  pink. In the wild of the Atlantic Ocean, they eat crustaceans that turn their flesh pink. 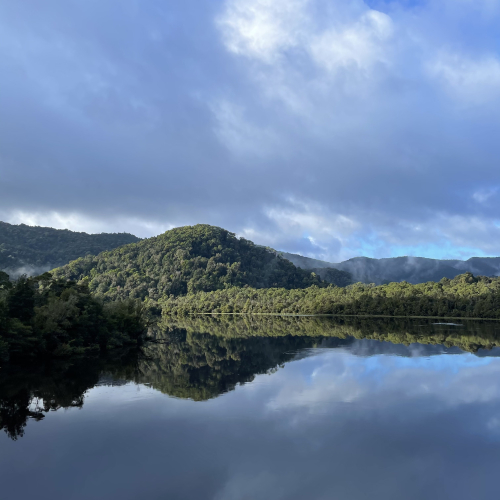 The Gordon river was incredible. Gliding upstream in the boat was like entering a zen zone of wilderness. It was quiet and the river was calm and still, reflecting all the vegetation on the banks of thriver as well as the clods and the sky. 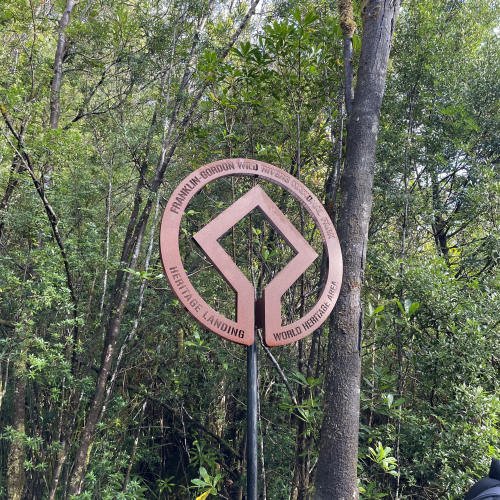 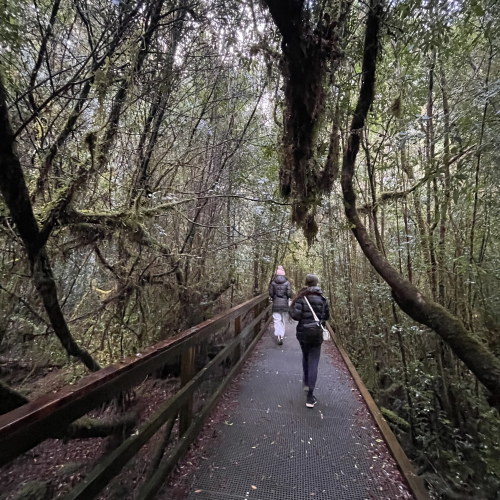 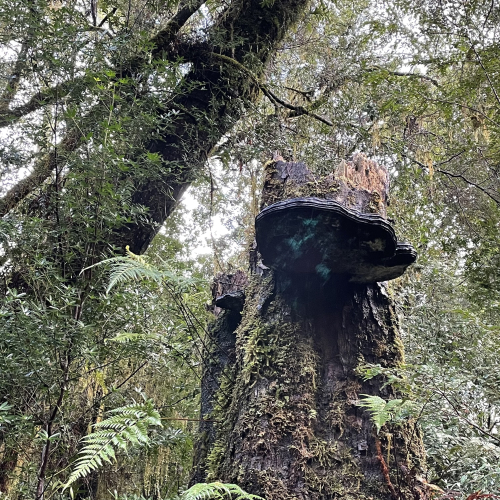 The best bit of the cruise was walking along the elevated boardwalk at Heritage Landing. A tree spotting trail had been created with gorgeous metal symbols placed next to different native Tasmanian trees. 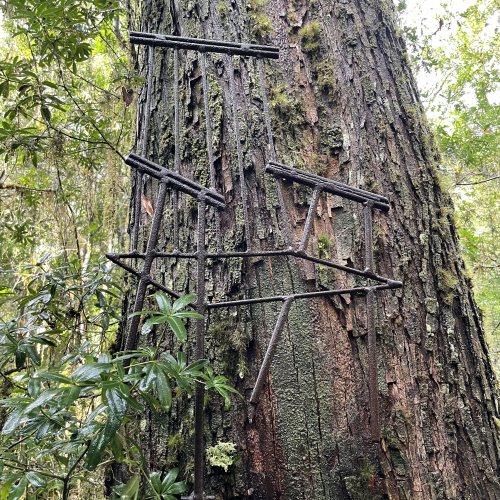 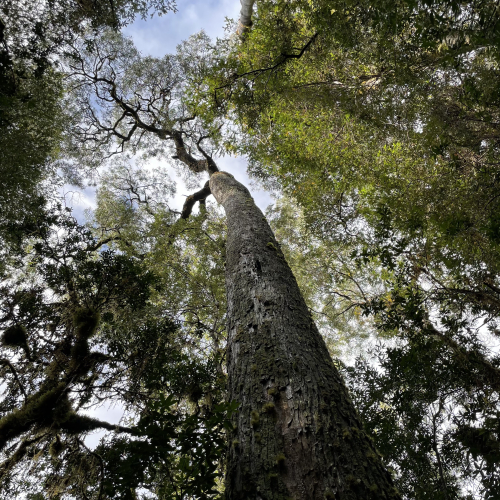 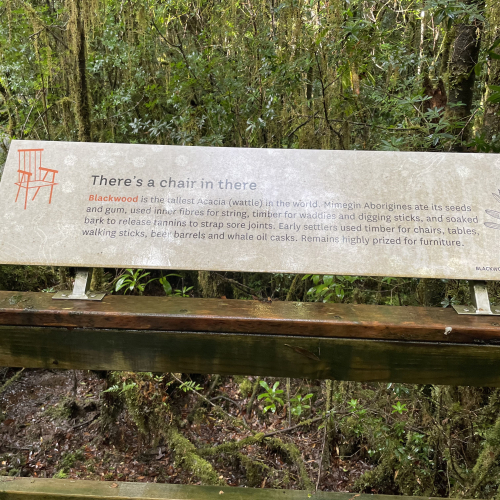 Once you spotted the tree and its symbol, a nearby sign gave you information about the tree and its uses. After wandering through the Tarkine and wondering what we were looking at, it was wonderful to be in a place where you could easily identify and learn about the vegetation around you. 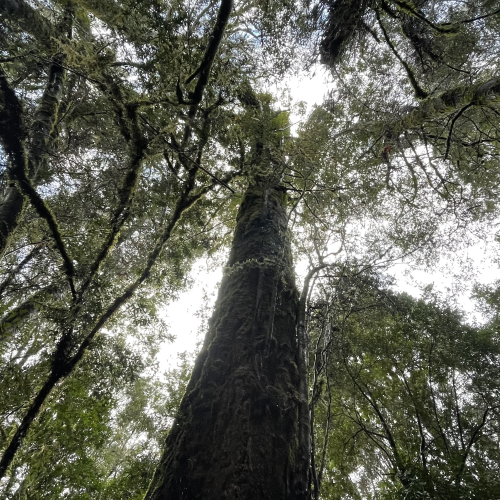 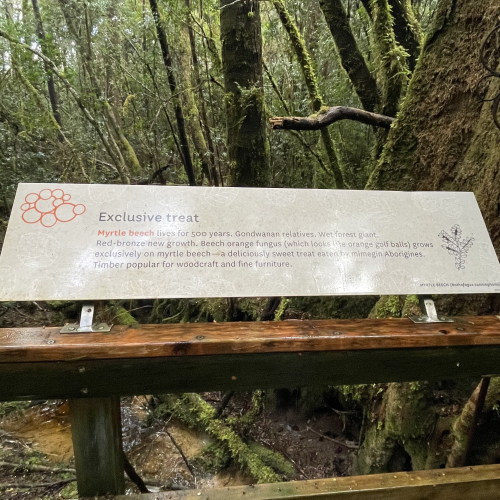 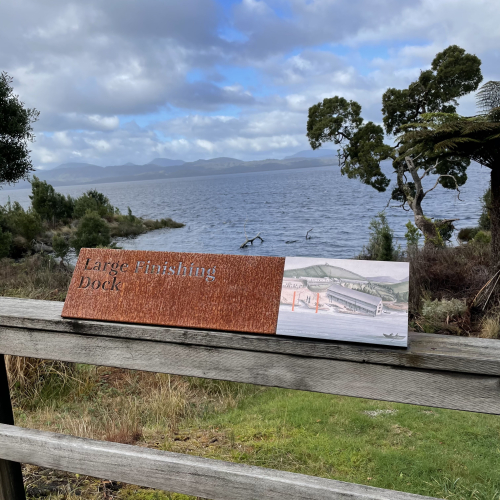 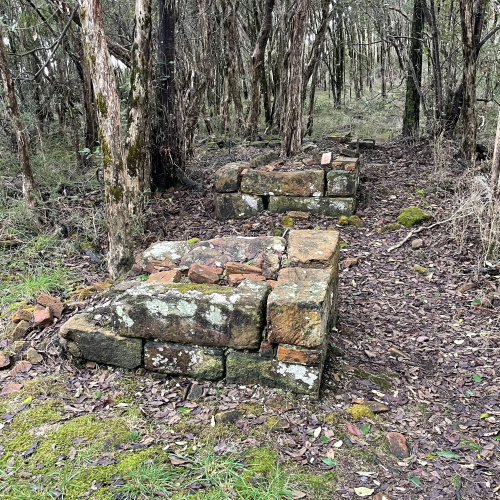 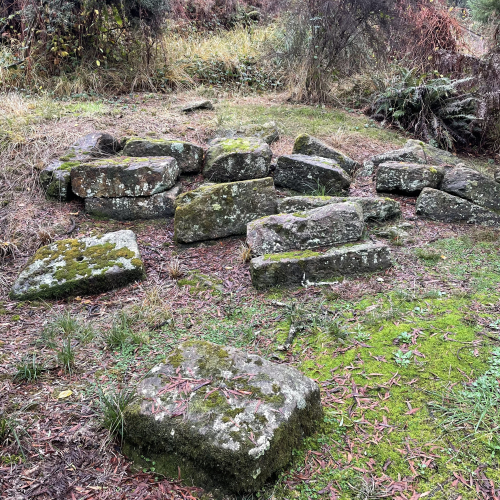 Back on board it was time for a buffet lunch before a guided walk on Langerrarerouna, known to invaders as Sarah Island and home to a penal colony in the early 1800s. The colony was so bad it was known as hell on earth by the convicts and death was seen as a means of escape. 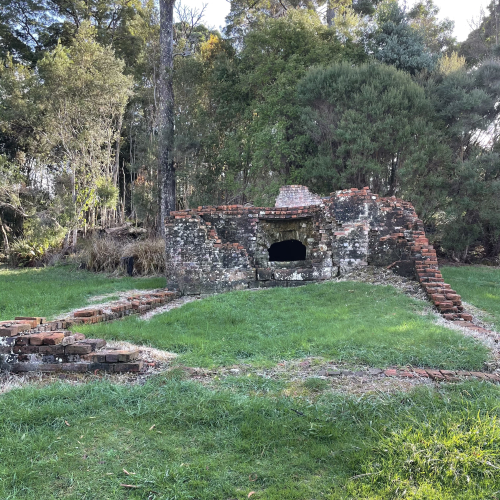 Our tour guide was Kiah, the main actor in the play we saw last night and she brought the same fantastic blend of humour and history to our tour around the island. We saw the remains of the penal colony and visited the sites of the ship building areas. There was a fantastic oven that had been built from bricks made across the water on the mainland. The roof of the oven is created from vertical bricks laid in a spiral pattern without any mortar. A fire is lit to one side of the opening and the oven can bake 400 loaves of bread with one load of wood and no smoke. 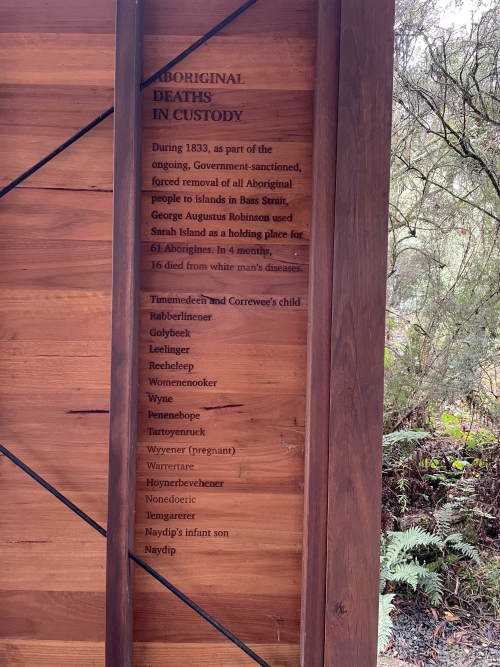 Before invasion, Langerrarerouna was visited seasonally by the Toogee and Mimegin people to gather swan eggs and meet with people in other tribes. Sadly, in the winter of 1833, sixty-one First Nations People were rounded up from the surrounding area and housed in the lower level of the Penitentiary before being shipped off to islands in Bass Strait. The story of the Tasmanian indigenous genocide is a myth we were fed at school. Along with all the other myths used to justify dispossession and colonisation.

While there, the convicts on the upper level tormented them by pouring water through the floorboards and urinating on them. Sixteen of the First Nations Peoples died of white man's disease while imprisoned.  History is not pretty and the convict ruins on the island hide the brutal treatment of First Nations people at the hands of the invaders.

I have conflicted feelings about this area and the pristine wilderness that hides such an ugly past.